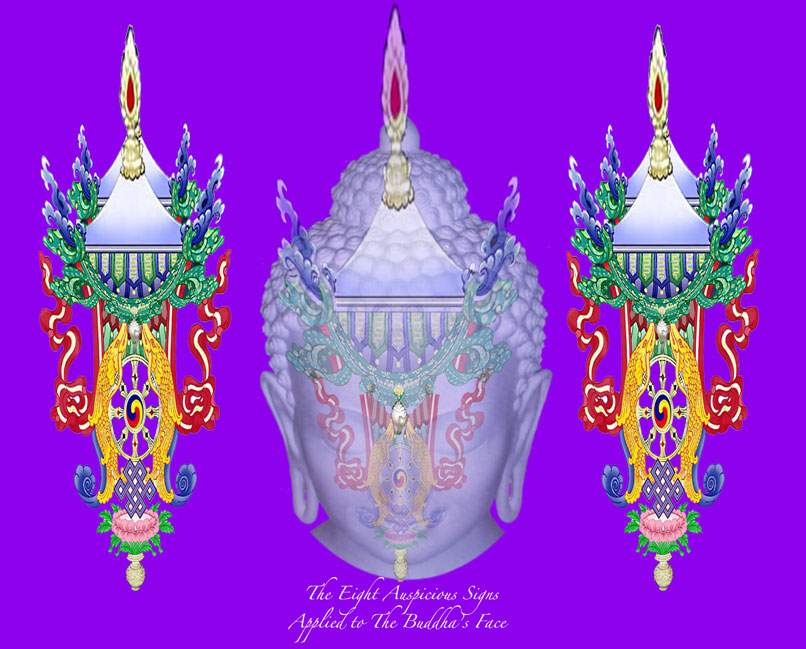 Buddha from Kadampa Buddhism card, 8 Auspicious Signs from http://buddhism.kalachakranet.org/ general_symbols_buddhism.html#5
"Make 2006 The Year of Enlightenment."
(A version of this page originally appeared on my blog as 'Happy Perihelion, January 4, 2006'
and now appears re-edited (same as below) as 'Happy 2006 Card')
(An earlier version that also placed the eight auspicious signs on the face also exists here.)

Wishing all of you Spontaneously Pure, Self-Refreshing, Temporary Illusory Pristine Awareness Embodiments a festive absorption into the light in 2006.

An Explanation of The Symbols on the Buddhas Face

The graphic shows The Eight Auspicious Signs, from the lowest to the top, placed on the Buddhas face. I have assigned them the following non-traditional meanings:
The Treasure Vase of fulfillment of all spiritual wishes (resonated trachea on inhale);
The Lotus as the Buddhas spoken teaching (resonated mouth-soft palette on inhale - OM or KAWWW);
The Endless Knot as the resonated septum;
The Golden Fishes as the activated left and right nose channels (flaring nostrils);
The Dharma Wheel as the Great Aspiration (pause on the inhale - AH);
The Conch Shell as the Third Eye Awakening);
The Victory Banner as permanent achievement of relaxed no-mind (blink - more below about this);
The Precious Parasol as the dissolving into full body bliss (HRUNG!).
The Explanation of The Eight Descriptive Words

Spontaneously: Because your naturally perfect state of buddhahood is occurring to you right now, effortlessly, despite whatever flotsam and jetsam may be clouding your view.
Pure: We all surf, consciously or not, on the wave of the NOW, while thoughts of the past and future continually dissolve into the primordial purity of total presence (the supreme ordering principle that fashions everything in this universe).
Self-Refreshing: See Purr/Snore exercise below.
Temporary: Obviously our embodiment is temporary, at least in this particular body.
Illusory: Even this pristine witness buddha-self, although capable of evolving through many levels of heavens and paradises, is ultimately illusory. Total absorption in Nirvana (Source, the Unmanifest) remains the ultimate goal -- and can be achieved while still embodied, according to the Buddhas teaching.
Pristine: This awareness, untouched by cause and effect, good deeds or bad, shines with the pure light of consciousness-love-bliss.
Awareness: In the center of the embodiment sits the witness self, watching the passing show.
Embodiment: What we all currently are experiencing planetside as witness selves in the flesh.


based on the Vajra Mantra
(Smiling makes the Purr a Snarl)

Inhale OM (sounds more like KAWWWW)
Snore-inhale thru mouth and flaring nostrils, resonating all nose-mouth-soft palette, throat and tracheal tube.
Pause very briefly on top of inhale: AHHH
(or just think it silently)
Exhale through mouth with gargled French R and tracheal rattle: HRUNG!
Blink whenever a thought does not just keep drifting by, and it will skedaddle.
(Current MRI research and Tibetan yoga both suggest that consciousness shuts down for a microsecond when we blink)
Click here for a 22-second video demo of the purr-snarl exercise
Explanation of the PURR-SNARL

Your trachea that brings air to your lungs is a solid tube. When you purr/snarl, you are resonating your trachea along with parts of you mouth and nose. The main artery, the aorta, enters the heart just in front of the trachea. Blood being thicker than water, and water an excellent transmitter of vibrations, blood carries the tracheal resonance all the way to the capillaries in your fingers and toes. Total body bliss up to your tolerance level is possible. To increase your tolerance level: how well can you stand being tickled? (Wiggling your toes helps increase your tickle tolerance,)
The main mistake I think we westerners make with the Tibetan instant enlightenment (Mahamudra/Dzogchen) teachings is to think, Oh, if were already enlightened, the hell with meditation. Lets go bowling.
But you have to be swimming in unbelievable bliss before youre enlightened. This bliss-body thing can be achieved easily with the Purr-Snarls described above. Twenty to thirty Purr-Snarls and you should start feeling very, very good! How does it work? To explain again, youre resonating your trachea, the tube that brings air to your lungs. The trachea sits right behind your main artery, the aorta, where it enters your heart. The buzz youre creating buzzes your bloodstream, all the way out to the tiny capillaries. This gradually dissolves any lateral bands of tension in the body, so the more often you do it the less tense you feel and the faster you will achieve feeling very good right up to your bliss tolerance level.
What if your bliss tolerance level is set too low? (For most of us, it is.) You will need to increase your ability to tolerate more bliss. I do it by tickling my face around the nose and mouth with my fingertips or a ribbon or something -- anything that gives a light tickle works well. If it makes you shudder, and triggers what I call The Shoo-Fly Reflex (you shiver and want to tweak your nose), try wiggling your toes like crazy while you do it. You dont want to de-sensitize yourself to the tickle, but just increase your capacity to hold it without going over the edge into the reflex.
So heres hoping for a much more peaceful 2006 than the year we just finished. As the Zen folks say, Nothing is better than nothing! which I guess is the opposite of the famous Chinese curse -- that is, No news is good news instead of May you live in interesting times!
So what happened in 2006?
Oh, nothing. We just lived happily on the planet.
Peaceful and Happy Lives to All Beings!