The Absolutely FINAL break-through nirvanic exercise, in my opinion, is sleep-nursing on
The Lily. I originally named it Grandmas Kind Regard because I first learned it
from a Chinese sculpture of the Akshobya Buddha (see below). Studying his expression
further, I realized he was sleep-nursing on his soft palate, or uvula. However I also
view the tongue as the upper petal of the heart lily, and since this final break-through
was triggered by the enthusiastic interest of our friend the filmmaker Lilly Rivlin,
whose visit with us encouraged me to forge ahead. That night, while falling asleep, I
finally got it! Thank you so much, Lilly! 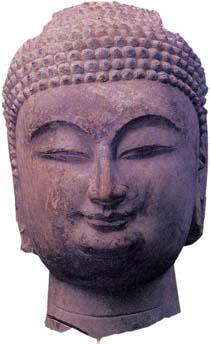 Recently visiting a website discussing loneliness, I wrote:
"What does 'lonely' feel like? To me it's a hollow, empty feeling in the pit of
my stomach. I think this is the same for others also, and frequently leads to
'the munchies' -- or binge drinking, or whatever. After some searching, mainly
watching animals and babies, I discovered what parents call 'sleep-nursing' that
babies do -- nursing in their dreams. I tried it and found it dissolved that empty
feeling very nicely. So I suggest try 'nursing' on your soft palate in the back of
your throat - let's say 200 times for starters. What's great about this exercise is
that anyone can do it, even if you're elderly or quadriplegic or at the office with
your boss staring at you. And you can do it anytime or anywhere (if you're not
eating, talking or sleeping).

How To
Place the tongue in its normal relaxed position, mouth closed but jaw slightly ajar,
breathe a few deep breaths, and then on the exhale, make a mouth movement as if
making the sound GUH as far back in your throat as possible. It may create a
cluck or a click as you do it. Now create a vacuum between the back of your tongue
and the soft palate area, going "Guh-Guh-Guh-etc." Pulsate that vacuum while you
suck on each "Guh," but breathing normally. Once you get the hang of this, try
allowing your cheeks and lips to move slightly in and out. If you can sense your
heartbeat, try synchronizing the sucks with your pulse rate. Do this for a while
and see if it has any effect on your general sense of well-being. For me it seemed
to trigger an amazing softening sensation around the heart and any feeling of
hollowness has long ago dissolved.
The next step I take is to substitute a silent "Kuh" for "Guh."
"Kuh" arises from a deeper part of the throat, and I think 'the deeper the better.'

Some further thoughts
Everything I know that is worth anything Ive learned from watching animals and
babies, (other than Candice O'Denvers wonderful short moments exercise," and more recently
Julie Hendersons exercises in her Embodying Well-Being book(only order-able from her website).
When my youngest son was still an infant (six months old), we lived with another
mother who had a boy his same age. They were of course great pals, and one day I
came upon them sitting together and trading what I finally realized were nursing
sounds. My son, breast-fed, was going Geh-duh, Geh-duh, which duplicated the tug
at the nipple necessary to release the milk. His friend was bottle-fed, and his
rubber nipple had a hole in it so large that he basically just glugged down the
milk. The sound he was making was Gul-lah, Gul-lah. They would say their sounds
to each other and then laugh hilariously. Obviously they were trading their most
favorite mantras.

A Final Note
After all the careful directions I gave, I realized the easiest way to learn to
do this is to imagine you are sucking on a lollipop  or just go out and get one!
Dont tell me Im the only person in the world who goes into nirvanic bliss doing this!
Please!